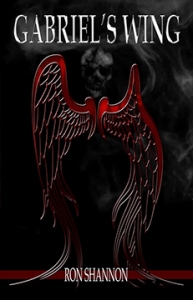 Gabriel’s Wing is another example of when I had to step away from a cover, give myself a break and let inspiration marinate for a bit.

Having read the story, as I typically do, I had formed a concept I thought would work.  It would have included a neon bar sign (Gabriel’s Wing) with wings, a lit and smoldering cigarette sitting in an ashtray, and a shot of whiskey. Logically, this should have worked as a concept but perhaps it would have been a bit too spot on. In practice, it simply didn’t come together as I thought it would.  This is when I realize instinctively, that this isn’t the right concept to go with.  It’s time to take a step back and play with other ideas to see what jumps to the foreground.

The wings on the cover were inspired by another set of wings I had been experimenting with for a tattoo that I had been working on. I found that while toying with these wings they naturally began to take on an angelic feeling in Illustrator as I drew so I just went with it to see what happened. Several hours were invested playing with these wings as they finally began to take the form as I had envisioned them in my mind…edgy and dark.  Gabriel’s Wing is a wonderfully dark story a few reviews have referred to it as “noir”. I wanted to make sure the cover reflected that feeling too.  Angel wings all too often feel light and airy, this story is definitely not light and airy. These wings needed to be edgy which is why I chose a dark red color for them and then highlighted them with directional lighting.

Truthfully, I probably could have stopped designing at that point, the wings could have worked on their own especially once I broke down the one on the right at the authors request but for the sake of balance on the cover I just couldn’t resist adding in a smoke skull and other tendrils of smoke to represent both the bar itself and death. When you read this book (which I highly recommend) you will understand from the first chapter who the inspiration for the skull is; I just simply had to include it.

The title graphic for the book is a very simple font with a combination of effects that I used to create a silver/chrome effect. This is perhaps the only part of the cover that I occasionally look at and consider changing to a simple white text. Not because I don’t like it but it doesn’t translate as well as I would like it to for digital formats.  It prints out great for the cover, looks sharp and edgy in that format just as I wanted but in digital formats it doesn’t translate as crisp as I had hoped.

I am proud of all the covers I have produced for different authors.  I won’t put something out that I am not proud of and I absolutely will not send an author a cover concept I am not confident in but this one stood out for me once I finished it.  I knew, I absolutely knew this was the right cover for this story. Luckily the author liked it as well.

That’s it, that’s how this cover came to be. As always thoughts or comments are always welcome.

This blog gives me the opportunity to talk about the book covers I create for some wonderful authors and share my thoughts on movies and books that I love. Who knows...I may even share some of my own writing on here...or whatever else happens to pop into my mind.
View all posts by Anita Dugan-Moore →
This entry was posted in Book Covers and tagged Anita Dugan-Moore, book covers, cover artist, Gabriel's Wing, graphic artist, Imzadi Publishing, Ron Shannon. Bookmark the permalink.