Cover Art: The Weight of Living 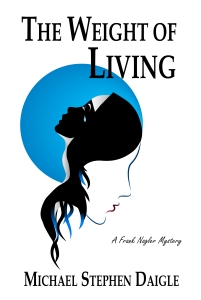 I am so late in posting this but I am happy to share that the artwork for Michael Stephen Daigle’s third Frank Nagler mystery, The Weight of Living, is finished!

The final cover shown here was certainly a result of communication between Mr. Daigle and myself, my initial concept shown below was completely different from the end product you see here.

Was the original a bad cover, nope…but the author did have something else in mind and this is where the give and take between the two of us is so valuable to me. He shared a few quotes with me from the book that served as the muse that led me to the final two-faced cover.

As with the previous covers I kept with the line-art to maintain the branded feeling for this series and that is simply common sense with a series. As a cover artist I want people to look at a cover and automatically recognize it as similar to another cover and think of that specific author.

I have to confess though as I created this somewhat abstract cover I very nearly sent it to the trash bin, I was so tempted to give up on it during it’s “ugly” phase. If you don’t happen to be an artist yourself then let me share something with you, almost all art work goes through an ugly phase…even writing, but the creator just has to power through that phase and see where the creation takes them. I’m so glad I stuck with this one too, I ended up very happy with the resulting cover art.

I began the final cover having absolutely no real idea where it was going to take me, I sat staring at a screen with nothing but a circle on the artboard for several minutes. Eventually I took a deep breath and began digitally doodling from there. Before I knew it I had sketched out a nose, a mouth…an entire woman’s profile, but where to go from there? I read and re-read the quotes the author had sent me (thank you Mike!)…and a simple idea hit me! A nun’s habit could serve a double purpose as hair as well for the figure I had just created….et voila! This cover came to life very quickly. 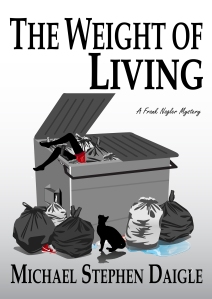 Now, as I mentioned I did have an earlier copy of the cover which I am sharing with you but looking back on that cover now, while I still like the cover, I can absolutely see that it wasn’t dark enough, not quite somber enough for the subject matter contained within the book.

I won’t get rid of that initial cover, it will stay in my archives because you never know, it just may work for another story that comes along; if not entirely, at least in part.

Take a look at both covers, do you prefer one over the other? What do you like or dislike about each. I’m always willing to listen to constructive feedback.

As I have mentioned in many of my other cover art posts I am lucky in the respect that I get to read these great books before they are published. Keep an eye on my blog, I’ll be posting a review for this one soon! It releases April 25th through Imzadi Publishing and will be available through Amazon, Kobo, Nook, and Walmart….if you like good mysteries check this series out, you will be glad you did!

This blog gives me the opportunity to talk about the book covers I create for some wonderful authors and share my thoughts on movies and books that I love. Who knows...I may even share some of my own writing on here...or whatever else happens to pop into my mind.
View all posts by Anita Dugan-Moore →
This entry was posted in A Game Called Dead, Book Covers, Mystery, The Swamps of Jersey, The Weight of Living and tagged Book Covers, books, Col Sec Series, cover art, cover artist, Detective Frank Nagler, fiction novel, fiction novels, Frank Nagler Mysteries, graphic artist, Imzadi Publishing, Jan Domagala, Michael Stephen Daigle, Mystery, Mystery Novel, Sci Fi, Science Fiction, The Blackstar Gambit, The Weight of Living, Thriller. Bookmark the permalink.