“In the 1830s, a group of quarrymen discovered a body buried on a hilltop two miles east of Dunipace, Scotland. The skeleton had been laid to rest in an ancient coffin of unhewn stone. No weapons, jewelry, mirrors, or combs were found in the grave. The only accompanying artifact was a large earthenware vase, and inside it the decayed remains of parchment. A report was published in The New Statistical Account of Scotland, and the skeleton was removed so quarrying could continue.

The body, the coffin, and the earthenware vase have all since been lost.

Along with the parchment and whatever was written upon it.”

“I write because I have seen the darkness that will come. Already there are those who seek to tell a new history…”

Wow, I loved this book! I downloaded it from Audible at the recommendation of one of my best friends.

If you enjoy stories based on history or anything along the lines of the Arthurian tales, get this book! I happily give this one a full five stars and urge you not only to get a copy of it…but download via Audible because Toni Frutin does a wonderful job narrating it.

I am a sucker for characters based on real people from ancient history and this book has that in spades! I instantly loved the main character Langoureth and her brother Lailoken, the twin Pict children of a royal family in ancient Caledonia who follow the Old Ways, worship the Old Gods and resist the new Christian religion that has invaded their homeland. 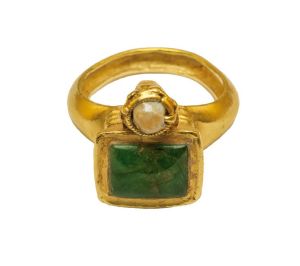 What the ring Langoureth kept pinned inside her dress pocket may have looked like.

The story of The Lost Queen follows Langoureth from childhood to womanhood. As a young woman she wants nothing more than to follow her heart to become a keeper of the old ancient ways, a Wisdom Keeper like her mother; but that can never be. As her father’s sole daughter her duty is to ensure her family’s security and make an advantageous marriage. Her life is not her own to decide, she is merely a pawn in a much bigger game. To strengthen alliances and secure her family’s position she has been promised to marry a man she does not love; Rhydderch, the Christian son of the tyrannical King Tutagaul. This loveless alliance could position her to one day become the Queen of Strathclyde…but her heart always remains with the soldier she unexpectedly fell in love with.

Her twin brother Lailoken however, is sent off on the path to become a Wisdom Keeper. This is a cherished and revered path to those who still followed the Old Ways but a difficult path for those opposing the new Christian faith. Lailoken’s path may cost him his life or at the very least his own sanity.

Theirs is a story that is truly compelling; I simply didn’t want to stop listening. I’m certain had I been reading the physical book I would have had a difficult time putting it down too.

Ms. Pike has a natural knack for story-telling and obviously did copious amounts of research before writing this tale. She talks about this research in her notes and as an ancient history geek myself, I found her notes to be particularly interesting and appreciated her including them. It wasn’t long before I was digging for information about these people myself, but I will do my best not to historically geek out. 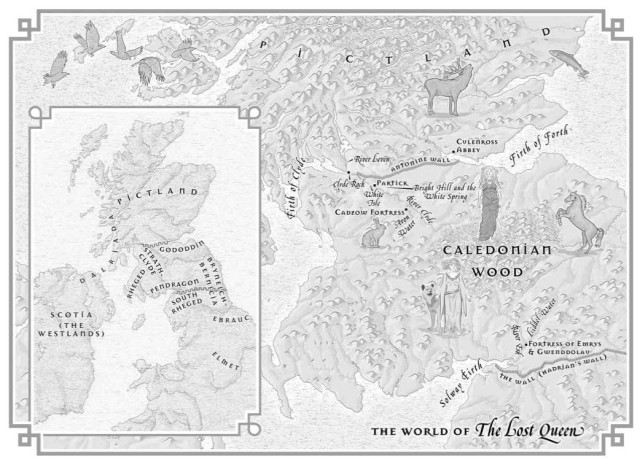 You see, many of the characters mentioned in this book did in fact live in 6th century Scotland and Langoureth did become Queen of Strathclyde when her husband Rhydderch was finally crowned King in AD 612. Spellings of names of course widely differ and Langoureth has been nearly wiped from history truly becoming…The Lost Queen.

Her husband Rhydderch (Rhydderch Hael) was known as Rhydderch the Generous to many. And believe it or not her brother Lailoken is believed to be the man that the Arthurian tales refer to as Merlin. Unfortunately Lailoken’s path wasn’t so easy. As a Seer and Prophet who eventually foretold the death of his sister’s husband and who fought in the Battle of Arfderydd, he eventually went mad. Due to his rantings and erratic behavior he eventually became known as “Myrddin Wilt”…meaning “Myrddin the Wild”. “Myrddin” being a Welsh name meaning “mad man” that stayed with him the rest of his life and in other languages was also translated as “Merlinus Caledonensis” (“Mad Man of Caledonia”) and “Merlin Sylvestris” (“ Mad Man of the woods”)….and so the name Merlin was born.

This is no romance novel, no fairy tale either. This is a well-crafted story about people who truly lived during a tumultuous time in what became Northern Scotland and what they may have gone through, liberally scattered with: adventure, intrigue, romance, betrayal, heartbreak, and honor. I highly suggest you get a copy and read it for yourself!

This blog gives me the opportunity to talk about the book covers I create for some wonderful authors and share my thoughts on movies and books that I love. Who knows...I may even share some of my own writing on here...or whatever else happens to pop into my mind.
View all posts by Anita Dugan-Moore →
This entry was posted in Audio, Audio Book Reviews, Autobiography, book reviews, Fantasy, Fiction, Historic, Historical Fiction, Reviews, Romance, Uncategorized and tagged Arthurian legend, Audible, Audio, autobiography, book review, book reviews, bookworm, Christians, Kindle, Merlin, Picts, reviews, Scotland, Signe Pike, The Lost Queen. Bookmark the permalink.