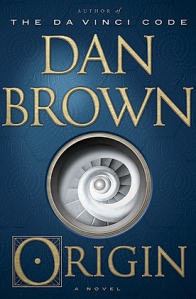 “Robert Langdon, Harvard professor of symbology and religious iconology, arrives at the ultramodern Guggenheim Museum Bilbao to attend a major announcement – the unveiling of a discovery that “will change the face of science forever.” The evening’s host is Edmond Kirsch, a 40-year-old billionaire and futurist whose dazzling high-tech inventions and audacious predictions have made him a renowned global figure. Kirsch, who was one of Langdon’s first students at Harvard two decades earlier, is about to reveal an astonishing breakthrough…one that will answer two of the fundamental questions of human existence.

As the event begins, Langdon and several hundred guests find themselves captivated by an utterly original presentation, which Langdon realizes will be far more controversial than he ever imagined. But the meticulously orchestrated evening suddenly erupts into chaos, and Kirsch’s precious discovery teeters on the brink of being lost forever. Reeling and facing an imminent threat, Langdon is forced into a desperate bid to escape Bilbao. With him is Ambra Vidal, the elegant museum director who worked with Kirsch to stage the provocative event. Together they flee to Barcelona on a perilous quest to locate a cryptic password that will unlock Kirsch’s secret.

Navigating the dark corridors of hidden history and extreme religion, Langdon and Vidal must evade a tormented enemy whose all-knowing power seems to emanate from Spain’s Royal Palace itself…and who will stop at nothing to silence Edmond Kirsch. On a trail marked by modern art and enigmatic symbols, Langdon and Vidal uncover clues that ultimately bring them face to face with Kirsch’s shocking discovery…and the breathtaking truth that has long eluded us.

Origin is Dan Brown’s most brilliant and entertaining novel to date.

I am still pondering what I think of this book as I write this review…and I’m struggling a bit. I’m a fan of Dan Brown’s; you’ll have noticed that if you’ve followed my blog. I’ve reviewed all of the Robert Langdon series up to this current one, Origin; with the exception of the Lost Symbol…that review is coming soon. But, I was really disappointed with Origin.

I really enjoy the character of Robert Langdon; I find him an easy character to like. He’s engaging, charismatic, quick-witted, and intelligent…nothing not to enjoy about a character like that. So, I’m not disappointed in him; my disappointment lays more with the plot and subject matter. Mr. Brown just didn’t keep my attention in Origin nearly as well as he did in his previous works. Honestly, I think that for me it comes down to this…Langdon’s stories now seem to follow a very predictable formula. Formulas are all well and good…until the book plots begin to feel like the same story just with different names and different locations.

I really wanted to write a better review for this book. I have enjoyed so many of them, but I just didn’t feel the plot for Origin was nearly as engaging as the plots of the series predecessors. The key component the other books Brown wrote that I really enjoyed had that this one didn’t was a topic I actually could care about.

In Origin, Robert has a close friend, Edmond Kirsch, who has invited him to an event where he will make a huge announcement. This brings Robert to Spain (he always goes to some amazing place where the action takes place, generally an art/educational/religious venue) where low and behold…something tragic happens to Edmond Kirsch and Langdon is up front and center for the action. Robert seems to have the worst luck with that doesn’t he?

Naturally, once again we have another villain working for God, well…the Catholic Church anyway. Sometimes they are actually with the church, sometimes working independently on behalf of what they believe to be the good of mankind in general…but very often they are within the Catholic Church specifically. This always leads Robert and his female companion, Ambra Vidal, on a race through an amazing city to beat the clock, which they always do, by the skin of their teeth.

The problem for me is that I had already figured out what the huge announcement Edmond Kirsch was going to make would be. And I had that figured out pretty early in the book…I mean, really early. That’s not usually a problem (me figuring things out)…but it becomes one if I don’t truly think of it as having real significance. I feel the majority of us can see what he is going to announce coming miles off anyway.

Additionally, this time I found there were a few characters I just didn’t care about either such as Ambra Vidal (the museum curator) and her fiancé, the Prince of Spain. Ambra felt like she had been stuck into the plot as the obligatory female in the scenario who is an unwitting (and somewhat dense) pawn that would conveniently enable the plot’s tragedy to happen. I found the a.i. character, W.I.N.S.T.O.N, designed by Edmond Kirsch to be far more engaging than Ambra.

I have established that Mr. Brown definitely has a theme to the Langdon series, but too much of the same thing leads to a less than satisfying read. I found my attention wandering far too often, or I was simply skimming the text as I read…that’s never a good thing if you find yourself doing that with a book. I don’t believe any author wants us doing that. Hence a disappointing read for me.

Would I recommend this book? Hmmm, no…I wouldn’t; not as a place to start with this series. I fear if reader picked this as their first read in the series that they wouldn’t pick up another that is truly a good read such as The DaVinci Code, Angels & Demons, or Inferno. Just know going in that if you read any of them that they all have a heavily religious theme to them that deals with the Catholic Church. Dan Brown seems to have just a tad bit of an issue with the Catholic Church.

Have you read Origin? If so, let me know what you thought of it as well.

This blog gives me the opportunity to talk about the book covers I create for some wonderful authors and share my thoughts on movies and books that I love. Who knows...I may even share some of my own writing on here...or whatever else happens to pop into my mind.
View all posts by Anita Dugan-Moore →
This entry was posted in book reviews, Mystery, Reviews, Thriller and tagged Audible, audio book reviews, book, book blogger, book reviews, books, Bookstagram, bookworm, Dan Brown, fiction, fiction novel, Mystery Novel, Origin, reviews, Spain. Bookmark the permalink.