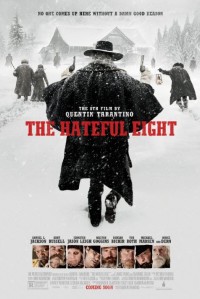 It is true to Tarantino’s grotesquely violent style; you can always count on him to drain every ounce of blood from his characters and leave it splattered over every surface but sadly, this movie lacks chemistry and heart. Chemistry between characters and chemistry between actors. Okay, perhaps I went into it expecting it to be more like Django Unchained; I was truly surprised to like that movie as much as I did but I expected more from this western.

Django had actors that really oozed chemistry and brought out the best of their characters. Walz and Fox paired up so seamlessly that no matter the subject matter they were a joy to watch. The viewer also had someone to get behind and root for with Django and when he finally gets his revenge the viewer gets to feel a guilty twinge of sadistic glee at their demise. Having someone to root for (whether a villain or a hero) is necessary in a movie for the viewer to feel invested in what happens. Hateful Eight is missing that component completely!

I don’t fault the actors in this movie for that either, this comes down to the writing of the story. There are some truly gifted performances from several actors (particularly Jennifer Jason Leigh in my opinion), but sadly they all seemed to stand alone, none of the performances ever really gelled cohesively. There’s also not a single character that I ever found myself giving a tinker’s damn about, especially not once all the proverbial cards were on the table. As far as I was concerned the entire cabin could have been blown to smithereens, the movie would have been much shorter….and I would have found it much improved.

Even the little mystery Tarantino tried to weave into the story was lacking. First, it was fairly obvious who the culprit was. Second, it felt to me that it was drawn out far too long and made to be too much of the story when really…the mystery was obvious and uninteresting. I hope you who are reading this realize I am working hard to avoid spoilers (you’re welcome.) The whole whodunit is pretty much staring you in the face in a fairly glaring fashion. If you don’t have that one figured out long in advance of it’s reveal then it’s back to the Scooby Doo mystery van for you!

Speaking of drawing things out way too long, that is my last issue with this movie….it’s way too long!  A movie that is set basically in one room really needs something quite compelling to keep the viewers attention. Sure we have lots of violence but the pace of this story is extremely slow so expecting the viewer to sit and watch it for over three hours is in my view simply asking too much. I’m certain I would have had a better opinion of it if Tarantino hadn’t been given me so much time to get bored with it.

What I did like about this movie is the old cinematography that Tarantino used but even that kind of confused me as to why he chose to use it. The true wide-screen technology that has gone the way of the Do-do bird with the advent of digital technology is beautifully used for the outdoor scenes and for those scenes I can see why he would be tempted to use it but for the indoor scenes that make up so much of this movie it doesn’t really make sense to me. There, however…I will give leeway for artistic license and leave it at that.

Overall, it’s not a “bad” movie per say, I just found it really disappointing…simply not up to my expectations. Once again, I don’t fault the actors for this…this comes down to simply a weak story and that lands on Tarantino’s shoulders.

This blog gives me the opportunity to talk about the book covers I create for some wonderful authors and share my thoughts on movies and books that I love. Who knows...I may even share some of my own writing on here...or whatever else happens to pop into my mind.
View all posts by Anita Dugan-Moore →
This entry was posted in Movie Reviews, Reviews and tagged Jennifer Jason Leigh, Kurt Russell, Movie Reviews, Quintin Tarantino, reviews, Samuel L Jackson, The Hateful Eight, Walter Coggins, Western. Bookmark the permalink.